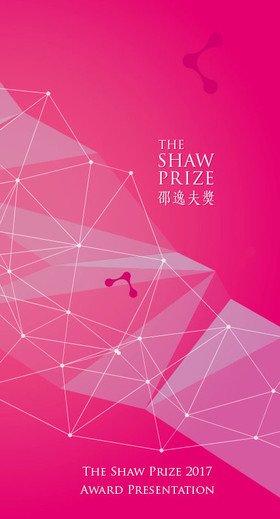 The Shaw Prize was established by the late Mr. Run Run Shaw in 2002 to honour international scientists in the fields of Astronomy, Life Science and Medicine, and Mathematical Sciences. Since the first prizes were awarded in 2004, many Shaw Prize Laureates have gone on to gain recognition by other prestigious international awards including the Nobel Prize. It gives me great pleasure to introduce the 2017 Laureates.

The 2017 Prize in Astronomy is awarded to Simon D M White of the Max-Planck-Institut für Astrophysik for his contributions to the understanding of structure formation in the Universe. With powerful numerical simulations he has shown how small density fluctuations in the early Universe developed into galaxies and other nonlinear structures.

The Prize in Life Science and Medicine is awarded to Ian R Gibbons of the University of California, Berkeley and Ronald D Vale of the University of California, San Francisco, for their discovery of microtubule-associated motor proteins: engines that power cellular and intracellular movements essential to the growth, division, and survival of human cells.

The Prize in Mathematical Sciences is awarded to János Kollár of Princeton University and Claire Voisin of College de France for their remarkable results in many central areas of algebraic geometry which have transformed the field and led to the solutions of long-standing problems that had appeared to be out of reach.

Our Universe is expanding. More than 13 billion years ago it was cooling down from a very hot, very dense initial state, which we call the ‘Big Bang’. Normal, baryonic matter making up the Earth, the Sun and the visible Milky Way cannot account for the total mass in galaxies and galaxy clusters, and an additional component of non-baryonic, ‘dark matter’ is required, as long as Newton’s laws are applicable on these scales. Finally to understand the observed geometry and expansion history of the Universe a pervasive ‘dark’ energy is required. Our current standard cosmological model posits that small density and temperature fluctuations in the Early Universe, perhaps generated by quantum fluctuations generated shortly after the Big Bang, were the seeds of the rich structure that characterizes our current Universe: galaxies with a wide range of sizes, masses, and appearance; groups and gigantic clusters of galaxies, and a vast ‘cosmic web’ of gas and galaxies connecting the largest clusters.

But how can one prove this conjecture? We cannot observe other Universes in different stages of evolution to test the standard model empirically. In principle the evolution of cosmic structure follows the well-known laws of gravity and relativity, along with hydrodynamics and electromagnetism. In practice, solving these equations has been an immense challenge.

Over the past four decades Simon White, together with an exceptional group of collaborators and students, has developed N-body computer simulations as a new tool of extraordinary power, yielding fundamental insights into cosmic structure formation. The most recent simulations capture with astounding detail the time evolution of cosmic structure between a few million years after the Big Bang to the present. They include ‘semi-analytic’ models of the small-scale physical processes that govern the formation and evolution of the baryonic components in galaxies, which were first proposed by White and Frenk in 1991. The current predictions match a remarkable variety of observations.

White has investigated and illuminated almost every aspect of the current paradigm of non-linear structure formation. As early as 1976 he conducted numerical experiments showing that strong sub-clustering was expected during gravitational collapse, plausibly explaining the lumpy structure of many nearby clusters of galaxies. In 1978 White and Lord Rees were the first to suggest that galaxies form by the collapse of dissipative, normal matter gas to the centers of much larger halos composed of dissipation-less dark matter. In the early 1980s White, Davis, Efstathiou, and Frenk showed that the dark matter could not consist of massive neutrinos or similar particles. White and his collaborators argued that the dark matter was ‘cold’ and may consist of a yet un-identified, massive elementary particle. In 1997 White, Frenk and Navarro showed from N-body simulations that the density profiles of halos of cold dark matter are described remarkably well by a simple two-parameter empirical law now known universally as the ‘NFW profile’. In 1998 White, Mo and Mao made the first specific predictions how disk galaxies may have formed at the centers of such dark matter halos.

It may still take decades more to be able to simulate the Universe in realistic detail. Nevertheless, we believe that this is the right time to recognize the remarkable advances in our theoretical understanding of cosmic structure formation. Simon White’s work and leadership over several generations of increasingly realistic modelling stands out and makes him a most worthy recipient of the 2017 SHAW Prize in Astronomy.

Animal and plant cells have an elaborate network of tracks for moving cargo similar to modern light and heavy rail systems in large cities. One of the two major tracks is formed by a protein called tubulin which serves to guide the movement of particles within cells and to control the waving movement of cilia, finger-like projections, that allow cells to sense their environment or to propel things along their surface and in some cases to allow the cell to swim. Tubulin tracks also organize the duplication and separation of daughter chromosomes and organelles such as the mitochondrion when cells divide, and guide membrane compartments down the axon in nerve cells. Ian Gibbons (who regrettably is unable to be with us this evening but is proudly represented by his daughter, Wendy Gibbons) and Ron Vale discovered the motors that engage tubulin cables in cells to promote movement of membranes and chromosomes.

Gibbon’s initial discovery made in the mid 1960’s came from the observation of beating cilia isolated from a fresh water protozoan, from which he extracted a protein he called dynein that had the ability to cause tubulin filaments to slide past one another in the presence of the cell’s energy currency, ATP. When this work was first presented at a meeting of the American Society of Cell Biology, one notable cell biologist was heard to exclaim “oh my God” from the audience and another recalled that Gibbons received a standing ovation at the end of his talk, the only one this person had ever seen for a scientific lecture!

In 1985, Vale, working as a young student in a summer program at the Marine Biological Laboratory in Wood’s Hole, MA, found an activity in cytoplasm extruded from the giant axon of a squid that propelled membranes along tubules in a direction opposite to that sustained by dynein. Vale and colleagues dubbed the new motor kinesin and we now know that these two ATP-driven machines, dynein and kinesin, which together are encoded by dozens of genes, are responsible for much of the dynamic movement of material within virtually all cells that have a nucleus. The processes that they propel are intimately involved in normal human growth and development, and diseases linked to these genes lead to chromosome aberrations, neuropathy, schizophrenia, neurodegeneration, kidney disease and infertility. In spite of the medical importance of these motors, Vale and Gibbons, as passionate basic scientists, focused their energies on ever more precise visual and atomic resolution imaging of the motors as they carry their cargo along the surface of a tubule.

Our two awardees, though professionally and personally connected, come from very different backgrounds and traditions. Gibbons did much of his work in collaboration with his late wife Barbara at the University of Hawaii. Vale is a native Californian and has spent his independent career on the faculty at UCSF and as an Investigator of the Howard Hughes Medical Institute. But far from staying in place, like his motor protein, Vale maintains a dizzying pace of travel and engagement as a frequent teacher at courses in Wood’s Hole and in India and as the lead in a far-reaching online curriculum for life science called iBiology, which brings scientists from around the world to San Francisco to produce open access educational materials.

Gibbons and Vale have been recognized with numerous national and international prizes and elections to honorific societies, but the Shaw Prize is, we believe, the first that has recognized the complementary and interdependent nature of their discoveries. We celebrate their achievement and the impact it has had on basic cell biology and the application of that knowledge to human health.

The Shaw Prize is intended to recognise work that has had a major impact and that is still fresh and exciting. This year the Selection Committee in Mathematical Sciences decided to reward some quite remarkable achievements in the field of mathematics known as algebraic geometry. As its name suggests, algebraic geometry is a kind of fusion of geometry and algebra, a fusion that began when Descartes introduced his famous Cartesian coordinates, in which points could be represented as pairs or triples of numbers, and geometrical concepts such as length and area could be converted into algebraic ones. In particular, shapes can often be represented as sets of solutions of equations: for example, a circle of radius 1 can be represented as the set of solutions to the equation x-squared plus y-squared equals 1.

Modern algebraic geometry has taken this basic idea and run with it. It turns out that many geometric concepts become easier to understand when they are treated algebraically, and also that many algebraic concepts become easier to understand when they are treated geometrically. This fusion of algebra and geometry, followed by an extraordinary process of abstraction, involving concepts with exotic-sounding names such as varieties, sheaves, stacks, schemes, étales, and crystalline cohomology, which are mysterious not just to non-mathematicians but also to many mathematicians who are not fortunate enough to be algebraic geometers, has led to major advances not just in algebraic geometry itself, but also in many other areas, from number theory to mathematical physics.

The winners of this year's Shaw Prize in Mathematics are both towering figures in the field. János Kollár, who grew up in Budapest but is now a professor at Princeton, has many achievements to his name. One of his major strengths is an ability to develop pioneering new theory and lay groundwork that becomes central to the work of many other mathematicians. In particular, he has made major contributions to a fundamental area of activity known as the "minimal model programme", which, roughly speaking, attempts to find for each solution set of a system of polynomial equations a "simplest representation". This has seen big advances in the last few years that would have been inconceivable without Kollar's work. He has also done very important work in the geometric classification of higher-dimensional solution sets: it is not too much of an exaggeration to say that he has single-handedly built a new and extremely active subfield of algebraic geometry.

As a child, Claire Voisin entertained thoughts of becoming a philosopher. Who knows what she might have achieved had she followed that path, but fortunately for mathematics she didn't. Instead, she too became one of the world's foremost algebraic geometers. She solved a decades-old problem due to Kodaira, one of the giants of 20th-century algebraic geometry, found a new technique for proving that solution sets are not equivalent to ordinary n-dimensional space, a breakthrough that quickly led to many further results, and found an example that demonstrated that what had seemed to be a promising approach to solving the Hodge conjecture, one of the Clay Mathematics Institute's million-dollar problems, could not work, thereby shedding very important light on a very important problem.

Between them, Kollár and Voisin have transformed modern algebraic geometry, and their influence will continue to be felt for years to come.