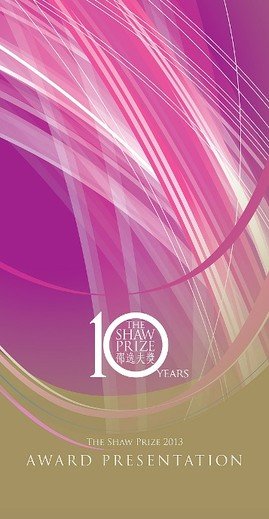 It was in this Hall in September 2004 that the first Shaw Prize Ceremony took place. Tonight at this tenth Shaw Prize Ceremony, it is perhaps not inappropriate to remind ourselves of the reasons why the Shaw Prize was established at the beginning of the 21st century

A century ago, in 1901, the Nobel Prize was launched in Stockholm with Roentgen as the first physics Nobel Prize Laureate. Roentgen’s discovery of x-rays was, as we all know, very, very important for mankind. But in retrospect its importance was dwarfed by other later discoveries that have saved even more human lives: In 1923 there was the discovery of insulin as the cure for diabetes, the disease more feared at that time than cancer is today. In 1945 there was the discovery of penicillin, the miracle drug, which together with its derivatives has saved more human lives than any other medicine known to mankind.

Indeed discoveries in physical and biological sciences in the 20th century have brought about unprecedented advances in human productivity, health and welfare, as well as its intellectual horizon, thereby fundamentally changing the fate of mankind on earth.

But such advances unfortunately also brought about unprecedented new problems for the 21st century, which include: explosive growth of population, shortage of resources, worsening environmental problems, the threat of epidemics and of nuclear war, etc. And it is obvious that these difficult problems can only be solved by new advances in scientific research.

It was to promote and foster such advances in scientific research that Sir Run Run decided to establish the Shaw Prizes at the turn of the century.

Sir Run Run, Honored Guests, Ladies and Gentlemen. The Shaw Prize in Astronomy for 2013 is awarded in equal parts to Steven Balbus & John Hawley for their discovery and characterization of the magnetorotational instability (MRI) which leads to turbulence and the outward transport of angular momentum in astronomical accretion disks.

The attractive force of gravity is responsible for the formation of bound structures over a wide range of scales, from planets to clusters of galaxies. Unbalanced, gravity would cause matter to collapse into black holes. Fortunately, the concentration of mass by gravity is impeded, at least temporarily, by the requirement that the contracting material rid itself of excess energy and angular momentum. Bulk kinetic energy can be converted into heat and radiated away but angular momentum is less readily disposed of. Consequently, contracting material often assumes the form of a differentially rotating disk. Familiar examples include Saturn’s rings and spiral galaxies. Nascent stars grow by accreting mass from disks that live several million years. The coplanar orbits of the solar system planets and multi-planet systems around other stars are vestiges of these disks.

More exotic accretion disks are found around compact objects such as white dwarfs, neutron stars and black holes. These systems shine by radiating gravitational potential energy released as mass spirals inward. For fluid to spiral in, its angular momentum must be transported out, but how this happens was for long a mystery. In 1991 Balbus & Hawley announced an elegant solution. They demonstrated that even a weak seed magnetic field is sufficient to unleash a powerful instability, the magnetorotational instability (MRI), that both creates and sustains turbulence while also amplifying the magnetic field.

The beauty and simplicity of the MRI is neatly captured graphically. Data for the plots shown on the screen were obtained by solving Newton’s equations of motion for two identical particles revolving counterclockwise around a spherical central mass. In the upper sequence the particles move independently on circular coplanar orbits. As discovered by Kepler and later explained by Newton, the orbital period increases as radius raised to the 3/2 power. This accounts for the growing lead in longitude of the inner (green) particle with respect
to the outer (red) one. The separation of the particles increases by about a factor of five in a single orbital period. In the lower sequence, the particles are connected by an elastic tether whose tension increases in proportion to its length. Although the particles start out on circular orbits, deviations soon become apparent. By the end of the sequence both their separation and the tension in the tether have increased more than tenfold. Comparison of the upper and lower sequences reveals a remarkable fact. Two particles separate more rapidly when gently pulled towards each other by the tether than they do when moving independently. This is a consequence of the seemingly obstinate behavior of an orbiting body. Gently pulled forward (backward), it moves onto an orbit of larger (smaller) radius where it orbits more slowly (rapidly).

Circadian rhythm, the biological phenomenon of the 24-hour day-night cycle has been observed since centuries ago in plants, animals, fungi and some bacteria. In our daily life, we all encounter these rhythms.  Its genetic control was not understood until 1971 when the late Seymour Benzer and his student Ron Konopka isolated a fruit fly that had mutation that lengthen, shorten or abolish the circadian rhythm, a gene which they referred to as Period, or Per for short. However, the mechanism of how circadian rhythm works remained obscure for almost 2 decades until the ground breaking contributions made by Jeffrey Hall, Michael Rosbash and Michael Young whom we are honoring this evening.

Jeffrey Hall was a geneticist using fruit fly as a model.  He collaborated with his colleague at Brandeis University, Michael Rosbash, a molecular biologist, and in 1984 together they cloned the gene Per that was inferred by Benzer and Konopka. Independently, Michael Young who was inspired by a Seymour Benzer lecture he had heard while a postdoctoral fellow at Stanford University cloned the same gene at the Rockefeller University.

Hall and Rosbash found that the protein made by Per oscillates at low or high levels according to day or night. Young and his group discovered a key second component of the circadian clock called Timeless or Tim which oscillates with Per.  Since then, they, followed by other researchers, discovered other genes that are important for the circadian clock and how their proteins interact with one another to control the circadian rhythm.  Subsequently, the mouse form of the circadian clock was cloned by Joseph Takahashi at Northwestern University, unraveling the mechanism in mammals. Many of these mammalian genes including those in human have homologues in the fly. underscoring the importance of the original discoveries.

The pioneering work of Hall, Rosbash and Young opens up a large number of studies that pay a crucial role in our understanding of this important biologic process. Not unexpectedly, mutations in genes that affected sleep in humans, though rare, have now been found and approaches to modify our sleeping patterns are being investigated.

As has been the case in recent years there were many superbly qualified candidates to choose from .Even so from early on in our deliberations and consultations with experts, it became clear that David Donoho stood out among our stellar list. One leading expert described him as being most influential theoretical statistician of his generation, as well as of the generations before and after him .Similar opinions were expressed by all the experts that we consulted.

David has introduced novel mathematical tools and ideas that have shaped both the theoretical and applied sides of modern statistics. A strong theme in his work is the development of fast computational algorithms coupled with rigorous mathematical analyses, for a wide range of statistical and engineering problems.An example is his very efficient "soft thresholding " algorithm for function estimation in wavelet bases, which works in the presence of noise and is used widely in applications.

David's insights into sparsity of representation in high dimensional space have played a major role in the development of the many algorithms that are used from statistics to engineering problems, such as ones connected with data compression .His introduction of optimization using  the the "L^1 norm " as a convexification of the problematic "L^0 norm" on functions, has been decisive in many of the algorithms that realize striking and unexpectedly efficient sparsification . These ideas are the basis for his and others' works on "Compressed Sensing" in which the algorithm "compresses while sensing" .This has become a thriving field with applications ranging from compression of images to to MRI scans.

These are just a few of David's many far reaching contributions to the mathematical sciences .His insights and innovations have inspired many works by others and will continue to do so for years to come. It is a pleasure to congratulate David from all of the 2013 selection committee on being a very deserved winner of the 2013 Shaw Prize in the Mathematical Sciences.