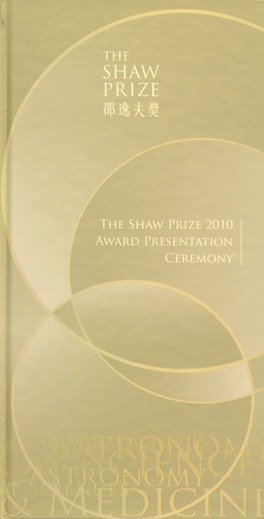 Welcome Speech by Professor Kenneth Young,
Vice-Chairman of Board of Adjudicators

I am pleased to make the following formal announcement on behalf of Professor Chen-Ning Yang, Chairman of the Board of Adjudicators.

Professors Charles Bennett, Lyman Page Junior and David Spergel will receive the 2010 Astronomy Prize for their leadership in the Wilkinson Microwave Anisotropy Probe (WMAP) experiment, which has enabled precise determinations of the fundamental cosmological parameters, including the geometry, age and composition of the universe.  For example, the age of the universe is now determined to be 13.75 billion years, with the remarkable accuracy of plus or minus only one percent.

Professor David Julius will receive the 2010 Life Science and Medicine Prize for his seminal discoveries of molecular mechanisms of the senses including those of touch, of scalding, and of spicy hotness, through specialized ion channels at the tip of sensory nerves.

Professor Jean Bourgain will receive the 2010 Mathematical Sciences Prize for his profound work in mathematical analysis and its application to partial differential equations, mathematical physics, combinatorics, number theory, ergodic theory and theoretical computer science. It is difficult to explain his achievements in so many different areas of pure and applied mathematics. But in one area of computer sciences his work has led to great advances that the layman can appreciate: he elucidated the true meaning of randomness.

The Shaw Prize in Astronomy 2010 will be awarded to Professor Charles L. Bennett, Professor Lyman A. Page and Professor David Nathaniel Spergel for their leadership of the Wilkinson Microwave Anisotropy Probe (WMAP) experiment, which has enabled precise determinations of the fundamental cosmological parameters, including the geometry, age, and composition of the universe.

How did the universe begin? What makes up the universe? Why does the sky look the way it does? Such questions have been asked for millennia, but today they can be subject to direct observational studies. It is now firmly established that our universe has been expanding and cooling for billions of years, ever since the Big Bang. The expansion is accelerating at present.

WMAP has determined the age of the universe to be thirteen billion, seven hundred million years by capturing the oldest light in the universe with precise measurements of its tiny variations in temperature and polarization across the sky.  The full sky anisotropic patterns seen by WMAP are direct views of the“baby universe” when it was less than 0.03% of its current age. In addition, WMAP has also accurately measured the density of matter, the density of atoms, and the amplitude and the scale-dependence of the initial fluctuations that grew to form galaxies. These fundamental parameters explain not only the WMAP results but also a host of other astronomical observations.

The WMAP data have shown that at present, normal baryonic matter makes up only 4.5% of the total density of the universe. Dark matter, a new type of subatomic particle, comprises the next 22%. The remaining 73.5% is dark energy, which acts as a form of “anti-gravity”to drive the accelerating expansion of the universe today. These results confirm earlier ones revealed by supernovae observations (recognized by the 2006 Shaw Prize in Astronomy).

The subtle anisotropic patterns in the WMAP picture of the baby universe are consistent with the idea that the universe underwent a period of rapidly accelerating expansion in its first moments, namely, “inflation”. Quantum fluctuations generated during the inflation era left imprints in CMB. The high precision measurements of WMAP can thus constrain physics of this very early epoch.

In declaring the WMAP results the 2003 “Breakthrough of the Year”, Science Magazine wrote, “Lingering doubts about the existence of dark energy and the composition of the universe dissolved when the WMAP satellite took the most detailed picture ever of the cosmic microwave background (CMB).” Also, “All the arguments of the last few decades about the basic properties of the universe—its age, its expansion rate, its composition, its density—have been settled in one fell swoop.”

In short, the WMAP measurements have become the frame of reference for cosmological research. The WMAP scientific papers are the most cited ones in the field.

Professor Bennett is the overall leader of the WMAP mission. He led the writing of the original proposal, organized and led the engineering and management teams, and oversaw the design, construction, testing, launch, and the scientific outputs of the mission. Professor Page is the Instrument Scientist, concentrating on the design and testing of the instrument. Professor Spergel is the WMAP leading theorist who played key roles in the scientific part. WMAP would not have been possible without the efforts of the entire team. In particular, the late David Wilkinson, in whose memory the WMAP mission is named, was the initial Instrument Scientist until he fell ill.

For their great achievements, Professor Bennett, Professor Page and Professor Spergel are most worthy for the Shaw Prize in Astronomy 2010.

David Julius is honored by the Shaw Prize by his ground breaking discovery of the molecular mechanisms by which the sense of touch allows us to perceive pain and temperature.

The ability to detect painful stimuli is essential to our health and survival as it allows us to avoid contact with agents that injure us. Using the chemical capsaicin, a component of chili pepper, he investigated how it can cause intense pain when applied to the skin. In a landmark 1997 publication, he reported the discovery of the pain sensing receptor that detects capsaicin. The receptor is an ion channel, and binding of this channel by Capsaicin causes the channel to open and leads to influx of cations that transmit signals to the neurons through the spinal cord and to the brain. This channel, now called TRPV1, belongs to the transient receptor potential cation channel, TRP family of ion channels, whose members are structurally related but serve different functions. In addition to pain, Julius found that TRPV1 is also activated by temperatures above 43 °C, which are perceived as painful providing another protective mechanism for us. Interestingly, he found that birds have a TRPV1 with a slightly different structure so that they are insensitive to the capsaicin in chili pepper seeds and therefore capable of carrying these seeds to spread chili pepper and similar plants. Tarantula bites can cause severe pain as their venom also targets this channel. Together, these discoveries provided the first insights into the molecular mechanisms by which we detect environmental stimuli through the sense of touch.

Julius elucidated how we sometimes become hypersensitive to pains. He found that tissue injury or inflammation results in release of protons or chemicals like bradykinin that lower the threshold of the TRPV1 receptor so that mild stimulant and warm temperature can elicit pain. This has the beneficial effect of protecting us against further injury, but also has harmful effect of leading to chronic pain in some diseases.

Julius also discovered other channels. One he called TRPV2 which is activated at higher temperature suggesting that temperature can be felt by different TRP channels. Another channel called TRPM8 that detect painful cold temperature as well as menthols which causes cool sensations. He also studied a channel called TRPA1 that is activated by wasabi and other mustard oils that cause pain, irritation, and inflammation. Importantly, TRPA1 is also the target of environmental irritants, such as acrolein, that account for the toxic and inflammatory actions of tear gas, vehicle exhaust, and metabolic byproducts of chemotherapeutic agents.

Together, the discoveries of David Julius and his colleagues constitute a major contribution to our knowledge of a fundamental biological function that has important medical implications. His work has revealed molecular mechanisms that explain how one of our five senses, the sense of touch, detects changes in temperature and environmental stimuli that we perceive as painful. In addition, he has elucidated the mechanisms that underlie hypersensitivity to pain, thereby providing new targets for the design of drugs to treat chronic pain syndromes that affect many of us.

I am delighted to be here to say a few words on the work of Jean Bourgain, this year’s recipient of the Shaw Prize in the Mathematical Sciences. As you know mathematics is, by its nature, a very abstract and technical subject which does not lend itself to simple presentation, so I will try to describe in broad general terms what Bourgain has achieved.

Most scientists would say that mathematics is concerned with equations, either algebraic when dealing with finite quantities or differential when dealing with the infinite processes that lead to the Calculus of Newton and Leibniz. All this is essentially true but alongside or behind equations there are inequalities, sometimes called estimates, which compare the size of two quantities or expressions.

In physics, Einstein’s discovery that nothing travels faster than light is an example. An elementary inequality, taught at school, is that the arithmetic mean of two numbers is never less than their geometric mean. In between these two extremes there is a vast range of estimates of great variety and importance. Such estimates are often extremely difficult since they reflect and quantify some subtle aspect of the underlying problem. Inequalities, especially when applied to the limit of the infinitely small or the infinitely large, lead to equations, but they can also provide more information.

Being told that an equation has a solution can be useful, but it is better to be told how to find it. Best of all is to be told how long it will take you, or your computer, to find it. Inequalities that estimate the length of a computer programme are in practice vital and provide a natural bridge between mathematics and computer science.

Jean Bourgain is one of the leading mathematical analysts in the world today, who has over the past thirty years led the field in solving a succession of hard problems centring round inequalities. He has written over 300 papers, solved many important problems of long standing and developed powerful techniques for others to exploit.

The fields in which Bourgain has made these fundamental contributions cover large parts of mathematics and impact on both physics and computer science. One theme that is at the heart of many of his breakthroughs is the exploitation of randomness in the study of deterministic systems. More generally his work links together algebra, combinatorics and analysis in many deep and fruitful ways.

In short Bourgain’s spectacular achievements in modern mathematics make him a very deserving winner of the 2010 Shaw Prize in the Mathematical Sciences.