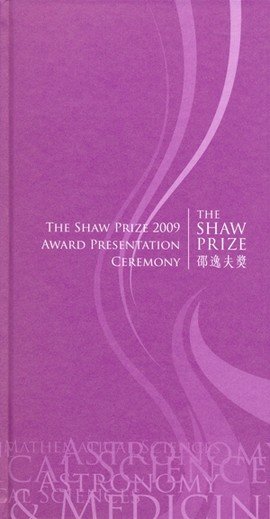 This year's three Shaw Prizes will be awarded tonight to 5 scientists.

Professors Douglas L Coleman and Jeffrey M Friedman discovered a gene called leptin which regulates food intake for animals and for humans. Their discovery clarifies the important subject of the origin of obesity.

Professor Frank H Shu is a renowned theoretical astronomer. His work on how stars have formed in the billions of past years has revolutionized our understanding of the history of the universe. We are especially happy that Professor Shu was the first Chairman of the Astronomy Committee of the Shaw Prize Foundation.

The Shaw Prize in Astronomy for 2009 is awarded to Professor Frank Shu, of the University, at California, San Diego in recognition of his lifetime achievements in theoretical astrophysics, particularly his contributions to our understanding of the spiral structure of galaxies, the formation of stars and planetary systems, and the evolution of the solar system.

During the 18th Century, Newton, Kant, and Laplace proposed that stars and planetary systems are formed through the gravitational collapse of rotating clouds of gas. During the past half-century, this idea has been developed into a rich theoretical tapestry to interpret diverse observations of the solar system and of newly-forming stars and planetary systems. In a career spanning more than 40 years, Frank Shu has played a central role in developing this tapestry.

Shu's research career began in 1964 with his advisor, professor C C Lin, on the density-wave theory of spiral structure in disk galaxies.

In 1977, Shu published a mathematical theory for the gravitational collapse of a centrally concentrated isothermal gas sphere as a model for star formation from dense clouds of interstellar gas. In subsequent papers with his students and collaborators, Shu developed a detailed model for the physical properties of newly-forming stars - "protostars" - that are still accreting gas from their surrounding gas clouds. They elucidated the critical role of interstellar magnetic fields. They showed how circumstellar disks of gas and dust form around protostars as a natural consequence of the collapse of rotating molecular cloud cores. Such disks are the birthplaces of planetary systems.

In 1987, Shu, with his student Adams and colleague Lada, developed the theory for reprocessing of starlight through the dusty envelope and the surrounding disk. This theory provides the standard paradigm by which modern observations are used to interpret the evolution of protostars.

With modern telescopes on the ground and in space, astronomers have discovered that spectacular circumstellar jets, outflows of molecular gas, and flattened disks accompany the birth of every star. The detailed magnetohydrodynamic "X-wind" theory that Shu and his students and collaborators have developed is widely regarded as the most likely explanation for this fascinating phenomenon.

In 1996, with his student Shang and his collaborator Lee, Shu applied the X-wind model to explain a long-standing puzzle concerning primitive meteorites: namely, glassy inclusions - "chondrules" - that have been heated to temperatures above 2000 K are embedded in a carbonaceous substrate that has never been heated above 600 K. According to his theory, the chondrules are condensations of material that have migrated to the newly-forming protostar, where they have been melted and expelled by the X-wind to the outer reaches of the disk where they become embedded in condensates of unprocessed material. Shu's prediction that chondrules would be found in comets, which were previously thought to be formed from pristine material far removed from the Sun, was spectacularly confirmed in a 2006 dust sample returned from Comet Wild.

With these contributions and many others, Frank Shu is a most worthy recipient of the Shaw Prize in Astronomy for 2009.

Obesity has reached epidemic proportions in many countries. Obesity is frequently associated with insulin resistance and diabetes that lead to heart, kidney and other diseases. Whereas obesity was once attributed solely to poor eating habits, the discovery of Douglas Coleman and Jeffrey Friedman led to our understanding of the biological control of appetite and the regulation of body weight.

These studies began with the work of Coleman at the Jackson Laboratories in Bar Harbor, Maine. Coleman investigated two strains of mice (ob/ob and db/db), both of which exhibit grossly morbid obesity and severe diabetes, caused by homozygous states for two different recessive mutations. Coleman suspected that the obesity in these 2 different strains of mice were under genetic control. So he performed experiments in which he joined together the circulations of these 2 strains of mice. When attached to a db/db mouse, the ob/ob mouse stopped eating and lost weight, while the db/db mouse remained obese. Coleman concluded that the ob/ob mice failed to produce a functional hormone that inhibits eating whereas the db/db mice overproduce the hormone, but lack the receptor necessary to receive and transmit the hormone signal. When their circulations were joined, the anti-obesity hormone from the db/db mouse crossed into the ob/ob mouse and induced its weight loss. The db/db mouse showed no change in body weight because it lacked the receptor for this hormone and therefore remained obese.

Coleman's hormone hypothesis was validated by Jeffrey Friedman, working at the Rockefeller University in New York. Before the genomes of human, mouse and other organisms were elucidated, this was an extremely difficult task. Friedman had to breed these mice for many generations to locate the chromosome that contained the gene locus. After years of work he found the gene on mouse chromosome 6. The gene encoded a secreted protein that Friedman named leptin from the Greek word, "leptos", meaning thin. This gene was mutated in the ob/ob mouse resulting in the absence of functional leptin production. As the function of leptin was to suppress appetite, these mice continued to eat and became obese. Surprisingly, the leptin gene was active in fat cells which secrete leptin. This was a totally unexpected result because fat cells were for a long time thought to form a passive tissue for storage and not known before to produce and secrete important hormones. Subsequently, Friedman and others identified the leptin receptor, and showed that the leptin receptor gene is defective in db/db mice, thereby confirming Coleman's foresight in proposing his hypothesis.

The Coleman/Friedman discoveries foster an explosion in our knowledge of how fat cells signal the brain to control energy intake. Friedman showed that leptin acts in the hypothalamus region of the brain to trigger a cascade of signals that regulate food intake. Together with insulin, it acts as a signal for adiposity. It influences the activities of several brain hormones and plays a role in many metabolic pathways

Mutation of the leptin gene is very uncommon. The very rare obese individual with this gene mutation responds well to leptin injections. The vast majority of obese people do not have leptin gene mutation and leptin is not effective for their therapy. However, it has begun to find use in some diseases and fertility problems.

The discovery of Coleman and Friedman has changed our concept of obesity from a defect in willpower to a misbalance of hormone signaling. The 2009 Shaw Prize in Life Science and Medicine honors them for their pioneering work.

Over the past 30 years geometry in 3 and 4 dimensions has been totally revolutionized by new ideas emerging from theoretical physics. Old problems have been solved, but more importantly, new vistas have been opened up which will keep mathematicians busy for decades to come.

While the initial spark has come from physics (where it has been extensively pursued by Edward Witten), the detailed mathematical development has required the full armoury of non-linear analysis, where subtle technical arguments have to be carefully guided by geometric insight and topological considerations.

The two main pioneers who both initiated and developed key aspects of this new field are Simon Donaldson and Clifford Taubes. Together with their students they have established an active school of research which is both wide-ranging, original and deep.

In the latter half of the 20th Century there was spectacular progress in understanding the geometry of higher dimensions and fairly complete results were obtained in dimensions 5 or greater. The two "low-dimensions" of 3 and 4, arguably the most important for the real physical world, presented serious difficulties but these were expected to be surmounted, along established lines, in the near future.

In the 1980's this complacent view was shattered by the impact of new ideas coming from physics. Maxwell's equations which govern electro-magnetism, and are basic for physics, had already been used successfully by geometers and not just in 4 dimensions. But these equations are linear and the Yang-Mills equations that deal with the structure of matter are non-linear and much deeper. It was these equations that were first exploited, in 4-dimensional geometry, by Simon Donaldson with such spectacular success. Entirely new phenomena were discovered, unique to 4 dimensions, along with the tools to study them. Spaces which previously had appeared indistinguishable could now be separated by the behaviour of the Yang-Mills equations in the two spaces. A whole new field was opened up.

Clifford Taubes contributed to this programme at various levels and his work centred around hard analytical questions concerning solutions of these equations. One of his great achievements was to exhibit a certain duality between the Yang-Mills equations which govern fields with the simpler equations that describe embedded 2-dimensional surfaces.

A rather different link between geometry and physics is provided by Hamiltonian Mechanics, which has its roots in the study of planetary motion, where a central topic is that of closed orbits (as with the elliptical orbits of planets). By an extraordinary tour de force Taubes was able to apply the new ideas from 4-dimensional field theory to solve a long-standing conjecture about closed orbits.

Donaldson has also studied the geometry behind Hamiltonian mechanics (in any number of dimensions) and shown that it shares surprisingly many features with classical algebraic geometry, which has been at the heart of mathematics for centuries. More recently Donaldson has turned his attention to the study of equations that are related to Einstein's equations of General Relativity, and outlined a programme of work that is excitingly active at the present time.

This brief summary of the contribution of both Simon Donaldson and Clifford Taubes shows how they have transformed our understanding of 3 and 4 dimensions. New ideas from physics, together with deep and delicate analysis in a topological framework have been the hallmark of their work. They are fully deserving of the Shaw Prize in Mathematical Sciences for 2009.