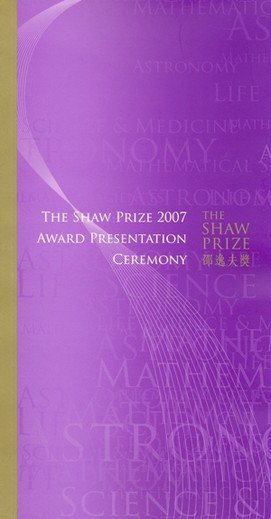 The three scientific fields covered by the Shaw Prizes, Astronomy, Life Science and Medicine, and Mathematical Sciences, are all making spectacular progress in recent years: As we shall hear from Professor Frank Hsia-san Shu, astronomers are enjoying their golden age of new developments; in life science and medicine, the clarification of structures and functions of important receptors in cells heralds the days when powerful new drugs will lead to new medication for many diseases; and in mathematics, its oldest and basic branch, number theory, is infused with new life through the introduction of new insight related to the concept of symmetry. The Shaw Prize Foundation is proud to recognize the trail-blazing achievements in these three fields.

The past fifty years represent a golden age for astronomy. Exciting new discoveries occurred across a wide range of phenomena. Our intellectual horizons expanded correspondingly. At the edge of that expansion, often creating mighty explosions of his own, one invariably finds Peter Goldreich.

Goldreich's career began auspiciously with his explanation, with Peale, of the role of resonances in the solar system. This understanding formed the basis for the later successful prediction that volcanoes would exist on Io. When the motion of Io was found to correlate with intense decametric radio emission from Jupiter, Goldreich and Lynden-Bell put forth an elegant explanation that relied on the presence of a million-ampere tube of electric current flowing between Io and Jupiter's magnetosphere, a prediction that was later confirmed by direct satellite imaging of the hot spot in Jupiter's atmosphere that is linked magnetically to Io.

In the mid-1960s, the origin of the beautiful spiral arms seen in disk galaxies became a hot topic of astrophysical research. In a classic paper with Lynden-Bell, Goldreich identified the swing amplifier as the dominant mechanism that causes self-gravitating, differentially-rotating, disks of gas and stars to spontaneously generate spiral instabilities.

With the stunning discovery of radio pulsars, many theorists focused on explanations that involved the emission of electromagnetic waves into a vacuum from a strongly magnetized, rapidly spinning, neutron star. With Julian, Goldreich pointed out that the immense electric fields associated with the rotation of a magnetized rotating neutron star would rip out electric charges from its surface and fill its magnetosphere with highly energetic particles. This picture has become the paradigm for all further theoretical development of pulsar emission mechanisms, as well as many semi-empirical attempts to interpret the observational data.

Intense emission in radio lines from the near-vacuum of interstellar space came also as a surprise. If the emission were thermal in origin, the sources would have equivalent temperatures in excess of a trillion degrees. The emission has to arise instead from maser activity, and it was Goldreich and his students who constructed the most comprehensive theory of maser pumping and amplification in interstellar and circumstellar gas.

Occultations of background stars by the planet Uranus showed that this giant planet is surrounded by an intricate set of narrow planetary rings. What keeps a ring confined to a narrow arc despite the disruption of continual collisions among the constituent particles? Goldreich and Tremaine proposed shepherding satellites, a prediction spectacularly confirmed by the Voyager satellite when it discovered two such bodies on either side of Saturn's F ring.

Related studies by Goldreich and Tremaine focused on the resonant gravitational interactions that occur in a rotating disk of material encircling a central body and nearby or embedded companions orbiting the same body. They foresaw that the back reaction of the spiral density wave produced in the disk would cause the companions to migrate in orbital location. Thus, when the discovery of extrasolar planets came a decade ago, theorists had ready-made explanations for the peculiar proximity of many such bodies to their host stars.

Among the most intractable of scientific problems is the nature of astrophysical turbulence. Rising to the challenge Goldreich produced the best theory of how the turbulence driven by solar convection can excite the rich spectrum of small-amplitude solar oscillations that provide such fruitful probes of the interior of the Sun. He has also studied how magnetohydronamic turbulence can explain the properties of interstellar radio scintillation and other transient phenomena observed in the interstellar medium.

The variety, depth, breadth, and innovativeness of Goldreich's most important contributions to theoretical astrophysics are truly staggering. He is universally admired as one of the most influential scientists in modern astronomy. Everything he touches turns to gold. For his lifetime achievements in theoretical astrophysics and planetary sciences, he is a most worthy recipient of the Shaw Prize in Astronomy for 2007.

Robert Lefkowitz is the James B Duke Professor of Medicine, and Investigator of the Howard Hughes Medical Institute at Duke University Medical Center, Durham, North Carolina, USA. His work has contributed in a major way to our understanding of how cells in our body communicate with other cells and how they respond to chemicals, hormones and drugs.

The human body is made up of many different types of tissues and many different kinds of cells. To coordinate body functions, cells signal to other cells in the same organ and in different organs by releasing chemical messengers that travel through the bloodstream. These chemicals control vital processes, ranging from brain function to heart beat to sexual reproduction. In work extending over 35 years, Robert Lefkowitz showed us how chemical messengers are received and interpreted by the cells they target. The key is a family of proteins, called G-protein coupled receptors (GPCRs) embedded in the surface membranes of receiving cells. These receptors are distinguished from other receptors because they crisscross the membrane seven times, thereby giving rise to the alternate name of 7-transmembrane receptors. The GPCRs were theoretical concepts in the early 1970's when Lefkowitz began the painstaking process of isolating a receptor and determining its structure. A milestone was reached in 1986 when Lefkowitz and collaborators at Merck Sharp and Dohme Research Laboratories isolated the gene encoding one of these receptors and used it to elucidate the protein's primary structure. With this information as a starting point, Lefkowitz and others soon found that the genome encodes hundreds of related receptors, each specific for a different chemical messenger. Lefkowitz's work up to this day continues to contribute to our understanding of the properties of these receptors, which are the most important targets of currently used therapeutic drugs. He demonstrated that receptors are not always active. After they transmit their signals the receptors are silenced by a feedback mechanism that prevents over-stimulation. In elucidating feedback silencing, Lefkowitz discovered novel proteins that not only silence receptors, but also play diverse roles in physiology, controlling processes that include cell growth and differentiation. Although many scientists contributed to solving the signaling problem, Lefkowitz led the way throughout. As a result of his work, pharmaceutical companies now understand how many of their classic drugs control pathologic processes. Examples include β-blockers (such as propranolol) for high blood pressure and heart failure, H2 antagonists such as (cimetidine) for peptic ulcers, H1 antagonists ("antihistamines" such as chlorpheniramine) for allergy, and dopamine antagonists (such as clozapine) for schizophrenia. This knowledge now permits companies to search for even more powerful drugs that target a wide variety of G protein coupled receptors, thereby treating a wide assortment of diseases. As a result there is no field or subspecialty of medical practice which has not been touched by his discoveries.

The Shaw Prize in Mathematical Sciences for 2007 is shared between Robert Langlands of the Institute for Advanced Study in Princeton and Richard Taylor of Harvard University.

For more than 2000 years mathematicians have studied numbers and have shown that all whole numbers can be factorized into products of prime numbers, numbers such as 2, 3, 5, 7 …. which cannot be factorized further. Thus the primes play the role of the elements in the periodic table on display in chemical laboratories. Unlike the elements however the primes never stop. There are infinitely many of them. Nor do they have the simple periodic pattern of the chemical elements, their behaviour is more subtle. For this reason, although prime numbers are discrete quantities, their collective properties are best studied by the continuous methods of analysis, as shown in the 19th century by the great Bernhard Riemann.

The theory of numbers, which is to a large extent the study of the primes, lies at the heart of mathematics. The difficulty of its problems have led mathematicians to devise a whole range of ideas and techniques which have then been taken up and proved fruitful in other areas.

While number theory has been studied purely for its own sake, with no practical applications in view, it now plays a crucial part in modern cryptology, the encoding of information for security purposes, particularly in the financial field. Your bank account is, in a sense, protected by prime numbers.

Another key theme in mathematics is the study of symmetry which was inherent in the work of Euclid and Plato on regular solids, such as the cube or the tetrahedron, but took on a more abstract algebraic form in the early 19th century with the work of Galois on solutions of algebraic equations. These abstract symmetries involving the interchange of symbols (as with the two choices of a square root) can be represented geometrically in space of 2, 3 or more dimensions, giving rise to the theory of representations. Over the past 50 years it has become clear that symmetry, through its representations, is the fundamental principle that explains the physical structure of matter.

Robert Langlands, a Canadian from British Columbia, currently at the Institute for Advanced Study in Princeton, has over the past 40 years developed a grand scheme which relates prime numbers to symmetry, based on the theory of representations. This Langlands programme subsumes the great work in number theory of past giants such as Gauss, Riemann and Hilbert, and provides a unifying vision of large parts of mathematics. It lays out a direction of work for mathematicians for many years to come.

Richard Taylor, originally from Cambridge, England, and now at Harvard University is a leading figure of the younger generation who has shown how to carry forward significant parts of the Langlands programme, using a whole variety of methods. He was a junior partner in the celebrated solution by Andrew Wiles of Fermat's Last Theorem (recognized in the Shaw Prize of 2005), and he has collaborated with many colleagues to obtain important new results in number theory. Among these is his extraordinary work on the famous 40-year old Sato-Tate conjecture.

The work of Robert Langlands and Richard Taylor demonstrates the profundity and rigour of modern number theory. Together they amply deserve the honour of the Shaw Prize.