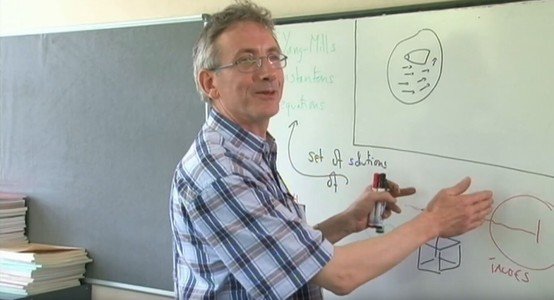 I was born in 1957 in Cambridge, England, the third of four children. At that time, my father worked as an electrical engineer in the Physiology Department of the University. My mother had been brought up in Cambridge and had taken a Science degree there. When I was 12 we moved to a village in Kent, following my father’s appointment to lead a team in London developing neurological implants.

The passion of my youth was sailing. Through this, I became interested in the design of boats, and in turn in mathematics. From the age of about 16, I spent much time studying books, puzzling over problems and trying to explore. I did well in mathematics and physics at school, but not outstandingly so.

In 1976 I returned to Cambridge for my first degree. The subject I liked best was geometry, although there was rather little of this in the Cambridge course at that time and my main training was in analysis, topology and traditional Mathematical Physics. The word “geometry” may convey a misleading impression. The modern subject is very far from Euclid’s, and it is perhaps better to think of vector calculus and, for example, the geometrical notion of the “flux” of a vector field.

In 1980 I moved to Oxford to work for a doctorate, supervised by Nigel Hitchin. This was an exciting time in Oxford. Penrose’s “twistor theory” was dominant, an early example of the now-pervasive interaction between geometry and fundamental physics. Sir Michael Atiyah, who supervised my work later, was a driving force in this and a few years before he, Hitchin, Drinfeld and Manin had done renowned work on Yang-Mills instantons, using twistor theory and geometry of complex variables. These instantons solve generalisations of Maxwell’s equations.

In my thesis I studied two different, but related, topics which have developed into the two themes of most of my subsequent research. The first theme is the interaction between differential and algebraic geometry. The problem that Hitchin proposed to me was to relate the instantons over complex spaces to “bundles” studied by algebraic geometers. What was unusual, in terms of the Oxford environment, was that I tried to tackle this problem using analytical techniques. This kind of approach was by no means new in other problems and in other parts of the world, but was not a strong tradition in the UK. I learnt the trade by studying preprints of Cliff Taubes and Karen Uhlenbeck, which opened up the analytical approach to Yang-Mills theory.

My original focus was on the case of a complex space, but certain central questions made sense on any 4-dimensional manifold. Thinking about these, and combining with an existence result proved by Taubes, led to the other topic of my thesis: the application of Yang-Mills theory to 4-manifold topology. This was quite unexpected. While the basic argument “stared me in the face”, thanks to my training in topology, hard work was required to carry it through in detail.

Now I turn to the decade 1983-93. I spent a year in Princeton, and met my wife, Nora, during a visit to the University of Maryland. Our three children, Andres, Jane and Nicholas were born, joining my step-daughter Adriana. (Andres and Jane have both now gained degrees from Cambridge and Nicholas is nearing the end of high school. Adriana is a mathematics teacher.) In research, my focus was on developing the topological applications into a general theory. This was as part of a large endeavour by many mathematicians around the world. I wrote one monograph, with Kronheimer, about these ideas and another dealing with Floer’s theory, which extends them to 3-dimensional manifolds. I was made a Professor in Oxford in 1985 and was fortunate to have many research students.

From about 1994 I developed a different research strand, introducing techniques into symplectic topology. The ideas meshed in well with the results obtained by Taubes around that time. After two decades of dramatic development, 4-manifold theory has reached a much more steady state and, while a great deal is known, there are huge areas where we are entirely ignorant. This strand was an example of an attempt to find some new approach.

We spent the year 1997-8 in Stanford, and I moved back to my current position at Imperial College, London. My wife runs a Medical Statistics Unit at King’s College. There was little geometry in Imperial then, but now, thanks largely to the drive of my colleague Richard Thomas, we have one of the main centres for research in this area. My work over the past decade has in a sense returned to my thesis problem, but extended into Riemannian geometry. This is an area with a longer history and the problems are much harder, but the theory is developing in an exciting way. Many excellent young mathematicians around the world are entering the field and contributing to these developments.