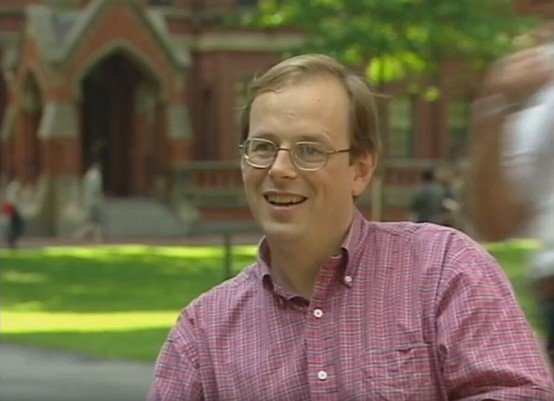 I was born on May 19, 1962 in Cambridge, England, but two years later we moved to Oxford where I spent the rest of my childhood. My mother, Mary, was a piano teacher and my father, John, a theoretical physicist. I enjoyed mathematics from a young age and was blessed with a number of inspiring mathematics teachers, including Tony Middleton at Magdalen College School. Although never a star at them, I greatly enjoyed the mathematics olympiads, which gave me my first experience of working on problems which took more than a few minutes to solve. But the biggest influence on my early scientific development was undoubtedly my father, who taught me never to be satisfied until I had really understood something completely. I also learnt from him not to fear asking simple-minded questions.

I was an undergraduate at Clare College, Cambridge. At this stage I developed a passion for travel and mountaineering, visiting the Alps, the Indian Himalayas and later the Karakoram and Ecuadorean volcanoes. I found it a great way to relax from mathematics which otherwise could be very consuming. It also became clear to me that number theory was the field that I found most exciting. I was attracted by the combination of simple problems, beautiful structure and the variety of techniques that were employed. However I very nearly chose to do graduate work in another area because I felt my abilities were insufficient to make an impact in such a hard field with so many outstanding practitioners. I overcame these doubts and went to graduate school in Princeton. Here I chose to work with Andrew Wiles attracted both by the beauty of his work and his approachability. It was a wise choice. Andrew's influence on my work has been enormous. After completing my PhD I spent a year at the Institut des Hautes Etudes Scientifiques outside Paris before returning to Cambridge University and Clare College. I stayed there for the next 6 years, during which time I benefited greatly from John Coates' support.

In 1994 I had the wonderful good fortune to meet Christine Chang, who has made my life much happier. We married in August 1995 and now have two children: Jeremy (born in 1998) and Chloe (born in 2000). Since then I have devoted significantly less time to mathematics, but paradoxically my mathematical work has improved.

In an effort to combine our two scientific careers I left Cambridge University following my marriage to Christine, first for the Savilian chair of geometry at Oxford and then a year later for Harvard University, where I am currently the Herchel Smith professor of mathematics. At Harvard I have found a supportive and stimulating home with incomparable colleagues and students.

My mathematical interests centre on the relationship between two very different kinds of symmetry: certain discrete symmetries of polynomial equations discovered by Galois in the first half of the 19th century, and other continuous symmetries arising in geometry. In the simplest (commutative) case this relationship was one of the great mathematical achievements of the first half of the 20th century (class field theory). More recently a much more general (non-commutative) theory has developed which is often loosely described as the Langlands program. I am fascinated by the way these ideas relate two very different kinds of mathematics (one coming from algebra, the other more closely related to analysis) which on the face of it have no reason to be related. I am also deeply impressed at how progress on this "program" has led to the solution of old, concrete problems in number theory. The most notable, but certainly not the only instance of this, being Andrew Wiles' proof of Fermat's last theorem. (It was a wonderful opportunity when in December 1993 Andrew asked me to help him repair the gap in his first attempt to prove Fermat's last theorem, a task at which we succeeded in less than a year, though we used a wholly unexpected argument.)

Class field theory can be considered the one dimensional case of the program. My early work is concerned with the two dimensional case, most notably my work with Wiles alluded to above and its continuation with Breuil, Conrad and Diamond to prove the full Shimura-Taniyama conjecture which has important applications to the arithmetic of elliptic curves. Also my discovery of potential modularity results, which led to the proof of the meromorphic continuation and functional equation of the L-functions of all regular rank two motives. Subsequently Khare and Wintenberger again made use of these ideas in their ground-breaking proof of Serre's conjecture. More recently I turned my attention to any number of dimensions, most often in a long collaboration with Michael Harris. I consider our proof of the local Langlands conjecture and our work (in part with Clozel and Shepherd-Barron) on modularity lifting theorems and potential modularity theorems in any number of dimensions to be the highlights of this work. An application of this is the proof of the Sato-Tate conjecture (for elliptic curves with non-integral j-invariant). This account will make clear that I am someone who works best in collaboration with others. I am extremely fortunate to have had fruitful and very enjoyable collaborations with many different colleagues. I am also blessed to have been able to work with 20 very talented PhD students.