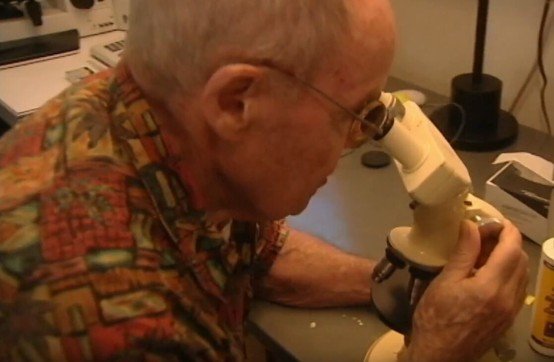 I was born on October 6, 1931, in Stratford, Ontario, Canada. After attending elementary and secondary schools in Stratford, I went on to McMaster University, Hamilton, Ontario, and received a BSc in chemistry in 1954. It was there that I met my future wife, Beverly Benallick. I received my MS and PhD from the University of Wisconsin, Madison, in 1956 and 1958, respectively.

I came to what was then known as the Roscoe B Jackson Memorial Laboratory in 1958 as associate staff scientist. My intention was to stay one or two years, learning some biology and genetics. Instead, I spent my entire career at the Laboratory, rising through the ranks to senior staff scientist and serving stints as assistant director of research and interim director. I retired from my scientific career in 1991. At my retirement ceremony, someone commented that my career was characterized by the ability to use the simplest technique to answer the most complex biological questions.

My early studies involved muscular dystrophy and the development of a new field, mammalian biochemical genetics, establishing that genes control enzyme turnover as well as structure. I am best known for my studies on diabetes-obesity syndrome in mice. I established that the severity of the diabetic state produced by either the obese or diabetes mutation was dependent on the inbred background on which the mutations were maintained. When maintained on the same inbred background, the condition produced was identical. This suggested that each mutation caused different defects in the same metabolic pathway. In a series of studies involving blood exchange among the two mutants and normal mice, I established that the obese mutant lacked some factor that prevents overeating by causing satiety, whereas the diabetes mutant produced the factor in excess, but was unable to respond to it because of a defect in the hypothalamus. These observations explained the identical syndrome produced by each mutation. In addition, these defects caused functional sterility, a thermoregulatory defect, and an increased metabolic efficiency that enabled the mice to survive and become obese on minimal amounts of food.

This increased metabolic efficiency extended to "normal" heterozygotes that had only one dose of the mutant gene. This increase in heterozygotes allowed them to survive on limited amounts of food, amounts insufficient to permit survival in homozygous normal mice. This beneficial effect brought out during periods of limited amounts of food may provide a mechanism whereby diabetic and obesity conditions persist in human populations. Dr Jeffrey Friedman identified the satiety substance in the mid-1990s and named it leptin. Leptin replacement in the obese mouse prevented all of the secondary defects and clearly established that all of the predictions in our studies were correct.

The leptin discovery provided the foundation for great advances in the understanding of the central and peripheral regulation of energy balance. We now know that adipose tissue is not merely a storage tissue, but is an endocrine organ that secretes a variety of hormones and cytokines essential for normal development as well as energy homeostasis.

I am very surprised that what I thought was an interesting set of observations would turn out to have such a major impact in the field of obesity.

In 1977, I was awarded the Claude Bernard Medal by the European Diabetes Federation. I was elected to the National Academy of Sciences in 1998, received the McMaster University Distinguished Alumni Award for the Sciences in 1999, and received the 2005 Gairdner Foundation Award. I served as a consultant to the National Institutes of Health, serving on the Metabolism Study Section from 1972 to 1974. I was frequently called on to consult on various special Study Sections involving genetic diabetes, obesity, and nutrition. I was a member of the special Study Section that established the first Diabetes, Research and Training Centres.

After leaving The Jackson Laboratory in 1991, I plunged into retirement with the same enthusiasm that I had for research. My love of the outdoors and concern for the environment led me to become actively interested in forest management, land protection, conservation, and other ecological issues. I’ve spent long hours each day rehabilitating our woodlot, making recreational trails that the public, especially students, were encouraged to use for both recreational and educational purposes. In all things science as well as environment, I’ve tried to leave things better than I found them.

As well as hiking and sailing, my wife and I travelled extensively, and were particularly interested in Native American cultures and their problems, extending from populations in the Arctic to South America. I lost my dear Beverly in April 2009.

Louis Pasteur said luck favours the prepared mind. My mind was prepared by many mentors at The Jackson Laboratory.