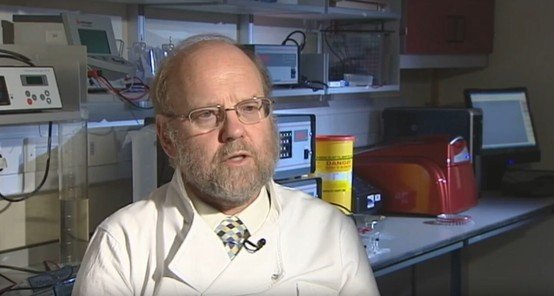 I was born in 1944 in a small village in the middle of England, Hampton Lucy. During the war nursing homes had been moved from the bomb damaged city of Coventry where my parents lived. My parents were both school teachers. My father was an outstanding student of mathematics at the University of Cambridge, but because his ambition was to teach, he declined opportunities to stay and carry out research. I have a younger sister, Mary, who initially trained for biological research, but later became a teacher for children with special needs.

To gain promotion for my father, we moved to the north of England - first to Shipley and then Scarborough. At Scarborough Boys High School I came under the influence of Gordon Whalley who taught biology. I entered the University of Nottingham to study agriculture. My ambition at that time was to train for advisory work to enable me to work overseas. Fortunately, all students in the School of Agriculture took the same courses for the first year and during that time I came into contact with scientific research for the first time. It was this experience that made me elect to study animal science in the Department led by Professor Eric Lamming. Two of his colleagues, Dr “Bas” Haynes and Barry Crichton spent a great deal of time in the laboratories talking to the students and were also very important in my career development.

The girl who I met at school and was later to marry worked in Cheltenham at that time and I wrote to laboratories at ever increasing distances from there seeking an opportunity for a summer internship. The first to reply was Professor Christopher Polge FRS and I spent eight weeks in his laboratory in Cambridge during the summer of 1966. I was very fortunate after I graduated in 1967 to move to Chris Polge's laboratory. For research on the Deep Freeze Preservation of Boar Semen I was awarded a PhD by Darwin College, Cambridge in 1971. Chris was a very generous and wise mentor and the greatest influence on my research career.

I then had the opportunity to hold a fellowship with Professor Polge and Mr LEA (Tim) Rowson, FRS who was an eminent veterinary surgeon in the field of animal reproduction. At that time we produced the first calves from frozen embryos and I learned some of the techniques of experimental surgery. Together these posts had given me a thirst for research and experience of a range of important techniques. I took up a post at the research institute on the outskirts of Edinburgh which later became known as the Roslin Institute.

My research has always been concerned with gametes or embryos. In some studies this was concerned with defining the mechanisms that control normal development, but in collaborative studies with David Sales and Cheryl Ashworth it was with understanding the abnormal events that lead to failure of development.

In 1984 my life was transformed by the launch of a project to genetically modify sheep so that they produced in their milk proteins needed to treat human disease. This project was led first by Rick Lathe and then John Clark, but was always with the help of Professor John Bishop. To make the genetic change, a few hundred copies of the specific gene were injected into the nucleus of an early embryo. It was to establish a new means of more effective genetic modification that we started to develop methods for nuclear transfer.

Nuclear transfer in livestock involves a large team of people each with a different essential skill. Key to our progress was the recognition by Keith Campbell of the importance of co-ordinating events in the two cells that are involved in nuclear transfer, the egg and the donor cell. It was fortuitous that for a matter of convenience we made some donor cells inactive, or quiescent and went on to produce the first offspring cloned from an adult cell, Dolly. We now know that this treatment is not essential, but it does confer an advantage.

My present appointment is as Director of the MRC Centre for Regenerative Medicine in the University of Edinburgh. The aim of the Centre is to develop new treatments for human disease through innovative research with stem cells. My own research aims to understand the molecular mechanisms by which unknown factors in the egg are able to modify the function of the donor cell so that it is able to control development to term.

My wife Vivienne and I have three children and five grandchildren. We live in a small village and enjoy being immersed in the countryside, watching the wildlife and following the changing seasons. I am a keen photographer, enjoy gardening and listening to a great variety of different music.