Autobiography of Lyman A Page Jr 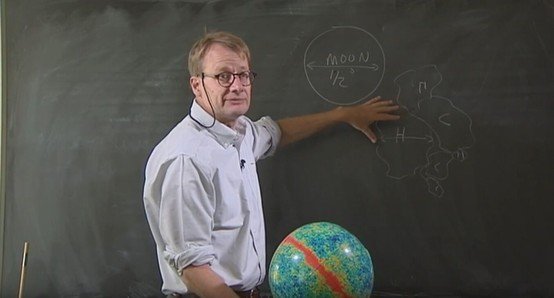 I was born in San Francisco, California in 1957 and grew up there and in Virginia, New Hampshire, and Maine. My father is a pediatrician and my mother an artist. I have a younger brother and sister.

Growing up, I played with radios, chemistry sets, collected rocks, studied wild edible plants, built things, and even helped start a bicycle repair shop. I enjoyed sailing and spent a lot of time around boats. Math was my best subject in school. While attending Bowdoin College, my interest in physics was sparked by an introductory physics class taught by Professor E O LaCasce. I have loved physics since then.

In an effort to get a sense for the breadth of physics I perused the college library. I ran across "Gravitation" by Misner, Thorn, and Wheeler and wanted to understand it. Bowdoin let me make up a special course in which I read and did problems from the book. One of my research reports was on an article Bob Dicke wrote about Mach’s principle. Since then, cosmology has particularly interested me.

After college, in 1978, I took a job operating a cosmic ray station in McMurdo Sound, Antarctica. I monitored the data and fixed the electronics that would occasionally break. I read the Feynman Lecture Series. Two of my fifteen months "on the ice" were spent at the South Pole helping Martin Pomerantz make solar observations.

Upon returning from the Antarctic, I bought an old wooden thirty-seven foot ketch and rebuilt her. From 1980 through 1982 I sailed her along the east coast of the US and around the Caribbean. To support myself and my boat I worked as a painter, rigger, and boat carpenter in various ports of call. I continued to read physics while on my boat. After limping through a storm just north of Venezuela, and having lost my rudder for a second time, I thought I'd try to attend graduate school.

I sailed into Boston Harbor and within two days was standing at the door of the MIT graduate physics office. The office was closed but Professor Herbert Bridge, who stood behind me as I peered through the door, offered to have my CV typed up and circulated to the faculty to help me find a job. One of the first people I talked with was Rai Weiss.
He said I could work in his lab but that he could not pay me. I supported myself as a carpenter in Boston and worked in the lab at night and on weekends. It worked out. Rai subsequently got me into graduate school.

Steve Meyer became my thesis advisor and got me started in CMB work, and in thinking about physics in new ways. Steve had done his PhD with Dave Wilkinson. My thesis was on a balloon-borne 0.3K bolometric radiometer designed to measure the CMB anisotropy. The first flight ended prematurely because the balloon burst. The second flight was successful and, through cross-correlation, was used to confirm the COBE discovery.

Most importantly, at MIT I met my wife, Lisa Olson. We met in the lab over a liquid nitrogen transfer.  She is now a biophysicist on the faculty at Columbia University. We have three boys.

From MIT I went to Princeton where I have been since. I had the good fortune of getting to know Bob Dicke and John Wheeler, two whose ideas shaped my intellectual trajectory. I also got the opportunity to work with Dave Wilkinson, whose group I had gone to Princeton to join. In 1991, Dave, Norm Jarosik, Ed Wollack, who was then a graduate student, and I sketched out satellite mission possibilities. After later joining forces with Chuck Bennett, Gary Hinshaw, and John Mather at NASA GSFC, who had also been thinking about a satellite, and Steve Meyer (Chicago), David Spergel, and Ned Wright (UCLA), the mission that became WMAP gelled. The team grew as the mission evolved. It has been an experience of a lifetime.

Since MIT my primary research has continued to be on measurements and analyses of the CMB. With colleagues and students, I've measured the anisotropy with HEMT amplifiers, SIS mixers, and bolometers and have been a PI or Co-I on over half a dozen CMB experiments in addition to WMAP. I currently have the honor of directing the Atacama Cosmology Telescope project.

I have had the incredible good fortune to be part of a series of observations that measured the emergence of the anisotropy signal from when it was dominated by instrumental noise to its current clear manifestation in the all-sky WMAP maps. In the process I have worked with an extraordinary group of friends and colleagues. We all count ourselves fortunate to have been able to participate in the blossoming of modern cosmology.