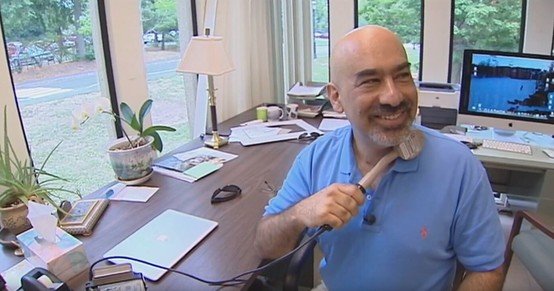 I was born in 1961 in Rochester, New York, where my father was a graduate student studying particle physics. When I was 4, we moved to Huntington, New York where my parents, Martin and Rochelle Spergel, raised my brother, sister and me.

My interests in astronomy began at an early age and were amplified by my course work and research work as an undergraduate at Princeton. As a junior at Princeton, James Binney introduced me to galactic dynamics. As a senior, Jill Knapp took me to the Very Large Array, a radio telescope, where we observed proto-planetary nebulae, the last gasp of a dying star.

After graduating Princeton, I spent a year at Oxford working with James Binney on dynamics.     After Oxford, I went to Harvard, where I did my thesis work with William Press. For my thesis work, I speculated about potential astronomical and experimental signatures of dark matter.  Current underground experiments are still looking for the annual modulation effect that I predicted in my thesis.

John Bahcall brought me back to Princeton as a long-term member at the Institute for Advanced Study. While I was at the IAS, supernova 1987A exploded in the Large Magellanic Cloud and I spent much of my first year at the IAS thinking about the first detection of extra-solar neutrinos. Leo Blitz introduced me to galactic structure. I began my first study of the millimeter sky, but with a focus on modeling our Galaxy rather than the cosmic background radiation. Our work showed that the Milky Way is a barred Galaxy.

While I was a fellow at the IAS, I met Laura Kahn, my wife, at a bar in New York City.  Laura has been my source of love and support. We have three wonderful children, Julian, Sarah and Joshua.

In 1987, I joined the Princeton faculty. In my early years at Princeton, I explored the idea that phase transitions in the early universe could generate density fluctuations that grew to form galaxies. When COBE reported its results in 1992, I realized that these models were ruled out.  While these models were not successful, exploring alternative ideas is an essential part of science and provided my own introduction to the cosmic microwave background.

Stimulated by claims that COBE proved that the universe was flat, I began studying curved universe models. While the COBE data did not rule out negatively or positively curved geometries, I recognized that higher resolution measurements could determine the shape of the universe.

In 1994, I was offered the greatest scientific opportunity of my career.  I was invited to join a team of scientists who were proposing to build a next generation satellite to observe the microwave background. Prior to joining this team, almost all of my work was done with small groups of theorists or as a single author.  Working with the WMAP team has been my greatest scientific experience. Without the unique contributions of the many very talented team members, WMAP would not have been a success.

When I learned of the capabilities of the proposed mission, I recognized that these sensitive measurements would have the potential to test our basic cosmological model. If the model fit the data, then these observations would be able to measure the geometry and composition of the universe as well as study the physical mechanisms that seeded galaxy formation. The all-sky measurements would also be able to determine the large-scale topology of the universe.

For me, the most intense and exciting part of the WMAP mission was the analysis of the first year WMAP data. During this intense period, I worked closely with Gary Hinshaw, our data analysis lead, Chuck Bennett and their group at GSFC, Lyman Page and Norm Jarosik at Princeton and my other WMAP colleagues. I was very fortunate to work with a superb group of graduate students and postdocs, who made important contributions to the multi-year WMAP analyses.

The most demanding part of the analysis was the detection of a pattern of large-scale polarization fluctuations in the three-year analysis, one of WMAP’s signature accomplishments. The polarization signal was nearly 100 times smaller than the temperature signal that WMAP was designed to measure. A combination of clever design and careful analysis enabled the detection of the signal. By measuring this weak signal, WMAP was able to make the first detection of the earliest stars and also rule out the simplest model of inflation in the early universe.

I feel very fortunate to have been able to look back into the first moments of the history of our universe.