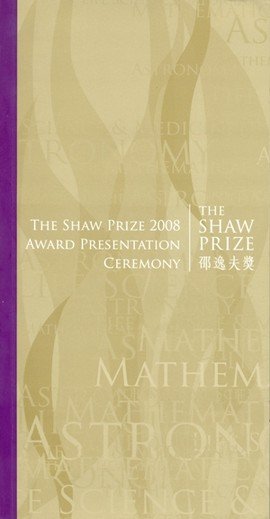 Welcome to the fifth annual Shaw Prize Award Ceremony. Tonight we shall be honouring six Laureates.

This year's Shaw Prize in Life Science and Medicine is awarded to Sir Ian Wilmut, Professor Keith H S Campbell and Professor Shinya Yamanaka for their work in the cloning process of mammalian cells and in stem cell production. The possible benefits of future developments along such research lines are limitless, including the growth of human tissues and organs to combat various kinds of diseases.

Professor Vladimir Arnold and Professor Ludwig Faddeev are winners of this year's Mathematical Sciences Shaw Prize. Professor Arnold made fundamental contributions to the study of stability of dynamical systems. Professor Faddeev together with Professor Boris Popov solved a fundamental and difficult problem in non-Abelian gauge theory, which led to, among other results, the Nobel Prize winning work of ′t Hooft and Veltman. Professor Arnold and Professor Faddeev's works have profoundly influenced the developments of both mathematics and physics.

The 2008 Shaw Prize in Astronomy is awarded to Professor Reinhard Genzel for his outstanding contribution in demonstrating that the Milky Way contains a supermassive black hole at its center.

In early 1960s astronomers discovered quasars, a new class of most luminous extra-galactic object in the universe. To explain these phenomenon, a new energy release mechanism is proposed: Quasars are powered by accretion of material into super-massive black hole in the nuclei of distant galaxies. After all the surrounding gas and dust consumed, quasar becomes an ordinary galaxy. This idea led to Donald Lynden-Bell and Martin Rees at the end of the 1960s and early 1970s to propose that the Milky Way and perhaps most other galactic nuclei might contain a central massive black hole. To proof this hypothesis is a great challenge for the observational astrophysics. The evidence for such an object was lacking at the time because the center of the Milky Way is obscured by interstellar dust, and was detected only as a relatively faint radio source.

In the late 1970s and early 1980s, Charles Townes and his collaborators including Reinhard Genzel, developed instruments capable of observing the center of the Milky Way at infrared wavelengths, which can pass through the interstellar dust clouds with relatively little obscuration. But the observations did not have sufficient angular resolution to prove that conjecture.

Starting in 1990 Genzel and his collaborators continued to develop new instruments to observe the center of the Milky Way at near-infrared wavelengths and with unprecedented angular resolution. In 1996, they reported two independent observations of the motions of stars clustered very close to the center of the Milky Way, both of which provided compelling evidence that the central object was indeed a supermassive black hole. Subsequently, Genzel's group and, independently, a group led by Andrea Ghez, continued to track the orbits of these stars around the black hole and refined the estimate of its mass, which we now know is about million Suns. The Galactic Center thus provides now the best evidence that the black holes predicted by General Relativity are realized in nature, and the proof by Genzel's group leaves little doubt that similar concentrations of stars seen at the centers of other nearby galaxies also manifest the presence of supermassive black holes. The fact that many galaxies contain supermassive black holes is one of the outstanding clues to the mystery of how galaxies form.

For his great achievements Professor Genzel is most worthy recipient of the Shaw Prize in Astronomy for 2008.

During the development of vertebrates, the fertilized egg develops into the embryo and the cells in the embryo proceed to differentiate into somatic cells that make up the different tissues of the organs. The fertilized egg is considered totipotent because it can develop into a whole animal, while the cells in the embryo are pluripotent because they are capable of differentiating into cells that make up the different organs. Can this process be reversed, that is, can differentiated cells regain their potency? About fifty years ago, John Gurdon showed that this process could be reversed in the frog. However, in mammals, the reversal of differentiation, also known as reprogramming, has only been demonstrated within the last decade. The 2008 Shaw Prize in Life Science and Medicine honors the scientists who discovered this mammalian phenomenon. Their contributions give us insights into normal and abnormal mammalian development and provide new approaches to improve agriculture and to treat human diseases.

Sir Ian Wilmut is Professor and leader of the Queen's Medical Research Institute at the University of Edinburgh. Professor Keith Campbell is currently Professor of Animal Development at the University of Nottingham. In the 1990s, Wilmut and Campbell, working together at the Roslin Institute at Edinburgh, used the sheep model to understand the physiology of embryo development. They devised ways to culture embryos so that newborn sheep can be derived. Their studies led to experiments on reprogramming using the cell nucleus. They transferred the nuclei of fetal and adult cells into fertilized egg and derived newborn sheep from them. One live born that they called Dolly, was derived from the transfer of the nucleus of an adult cell. Thus Dolly was the first example of reprogramming the adult cell back to totipotency in a mammal. They also showed that by incorporating a human gene into the DNA of the nucleus before the transfer, the derived animals could produce human products. Since then, the work of Wilmut and Campbell has been duplicated in many other animal species, and has provided an approach to improve agriculture practices and to produce useful therapeutic products.

Professor Shinya Yamanaka is Professor at the Institute for Frontier Medical Science at the Kyoto University. He is also a L.K. Whittier Foundation Investigator in Stem Cell Biology at the Gladstone Institute of the University of California, San Francisco Professor Yamanaka's research focuses on ways to reprogram adult somatic cells directly to embryonic cells. He systemically examined and analyzed hundreds of genes that are expressed differently in embryonic and adult cells. In 2006, he startled the scientific community by reporting that the addition of just four genes to the adult mouse skin cells can reprogram them back to resemble embryonic cells that he called induced pluripotent stem cells. He further showed that these cells could produce fully reproductive mice, proving definitively that these cells are pluripotent. In November 2007, Yamanaka's laboratory, concurrently with James Thomson's of Wisconsin, startled the world with the news that human skin cells can also be reprogrammed into pluripotent stem cells in a similar manner. By directly reprogramming adult skin cells from a patient into stem cells, these cells can be used to study the biochemical processes that lead to the disease, and to design new drugs to interfere with the disease processes. The defects that cause disease can also be corrected in a patient's own stem cells, and the corrected cells returned to the patient for treatment. In just 2 short years, Yamanaka's work has been replicated and validated by researchers around the world. In fact, using mouse and rat models, it has recently been shown that it was possible to treat sickle cell anemia and Parkinson's disease in these animal models. Active researches are currently conducted by many laboratories to use this approach to treat various human diseases.

The discoveries of Wilmut and Campbell and of Yamanaka have ushered in a new era of investigation of mammalian development and cellular differentiation. Their innovations have provided new approaches for improvement in agriculture and for novel treatments of human diseases.

It was Isaac Newton who developed and applied calculus to the study of dynamics, notably to the motion of the planets round the sun. Since that time, differential equations have provided the framework for all of physics. This applies both to classical physics as developed in the 18th and 19th centuries and to the quantum physics of the 20th century. Our two mathematical laureates, Vladimir Arnold and Ludwig Faddeev, are part of this great tradition and their many contributions involve the application of subtle mathematical ideas to important physical problems.

Although Newton solved the 2-body problem, showing that the motion of a single planet is an ellipse, the general n-body problem, which incorporates the mutual influence of the planets on each other, is very much harder. It is problem such as this that Arnold (together with Klolmogorov and Möser) attacked with great success. This work has been enormously influential and still underlies current developments.

Arnold also studied the equations of an ideal fluid introduced by Euler in the 18th century and made some of the most remarkable discoveries in that field since the time of Helmholtz and Kelvin. In this and other work Arnold has shown the relevance of topology to dynamics. In combining geometrical and physical insight Arnold is a true disciple of Isaac Newton.

Faddeev has studied differential equations in the context of quantum mechanics. His work has had important applications in solid state physics as well as in recent models of string theory. He also found a surprising link between scattering theory and the Riemann Hypothesis, one of the major unsolved problems of number theory.

His most celebrated contribution was his collaboration with Victor Popov in showing how one should go about quantizing the famous Yang-Mills equations. Their approach laid the foundations for all subsequent work in this area and, in particular led to the complete treatment by 't Hooft and Veltman which was recognized by the Nobel Prize in Physics for 1999.