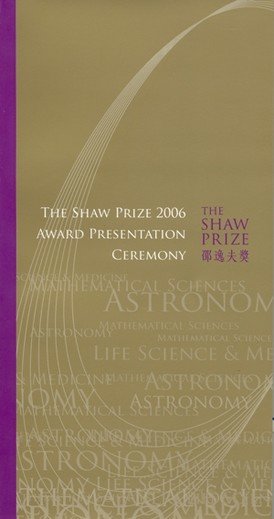 The Shaw Foundation Council is honored to award 3 Shaw Prizes for the year 2006:

The Life Science and Medicine Prize will be awarded to Dr Xiaodong Wang for his detailed study of the complicated biochemical mechanism for cell death. Before Wang's work, the mitochondria was regarded as only the energy source of cells. Wang found that in fact the mitochondria plays also an essential part in triggering cell death, opening the door to new areas of basic and therapeutic research.

This year's Mathematical Sciences Prize goes to Drs David Mumford and Wu Wentsun. Both winners started their careers in pure mathematics but in recent years have made separate major contributions to applied mathematics. Mumford's work are in pattern theory and vision research, while Wu's work are in computer proofs of propositions in geometry. The Shaw Foundation Council recognizes the increasing importance of mathematics in the increasing complexity of modern society, and is pleased to recognize great contributions by pure mathematicians to applied mathematics.

The Shaw Prize for Astronomy in 2006 is awarded to Saul Perlmutter, Adam Riess, and Brian Schmidt for the discovery of the acceleration of the universe, a surprising result that promises to revolutionize astronomy and physics. The story begins in 1917 when Einstein applied his theory of general relativity to the universe. Einstein felt that if the concept of inertia was to have an interpretation along the lines of Mach’s principle, then the universe has to be closed, a curved volume of space with no boundary. He made the additional, seemingly reasonable, assumptions that the universe on average is homogeneous and static. He found, however, that his equations had no solutions of this form unless he inserted an extra term that acts as a repulsion to offset the gravitational attraction of matter for itself. Thus were born both modern cosmology and the notion of a “cosmological constant,” Lambda.

Friedmann presented alternative solutions to Einsteins equations in which the universe expanded with time, and Lemaitre showed that the rate of expansion would accelerate if Lambda were the dominant term. In 1929 Hubble found that the universe is expanding, and Einstein repudiated the introduction of Lambda as the “biggest blunder” of his life since he too might have predicted the expansion had he looked for solutions that changed with time and started with a “big bang.” The assessment that Lambda is zero gained almost universal currency when physicists re-interpreted the cosmological constant as implying that space has a non-vanishing energy density even in the absence of matter and radiation.

The discovery of the cosmic microwave background in 1965 established the big bang theory on a firm foundation, and astronomers then largely focused on determining whether the geometry of space in such big bang models was closed, Euclidean, or open. With Lambda set to zero, all three models predict a steady deceleration in the expansion from a big bang.

Supernovae are exceedingly bright exploding stars, and they can be used as beacons to help solve the problem of the actual geometry of the universe. There are two types of supernovae, and most workers focused on type II supernovae, which are better understood from a theoretical point of view. Saul Perlmutter’s group automated search techniques for finding supernovae, leading to the routine discovery of many supernovae at relatively high expansional redshift z. Meanwhile, a Chilean group of astronomers showed that the variations in the light curves of type Ia supernovae, believed to be exploding white dwarf stars, could be renormalized empirically to get results with greatly reduced errors for cosmological applications. In 1994,Brian Schmidt formed the High-z Supernova Search team to further develop this method. Using type Ia supernovae, the Perlmutter and Schmidt teams simultaneously reached a startling conclusion in 1998: although the universe did begin its expansion with a big bang that decelerated with time, the rate of expansion has actually been accelerating in recent epochs.

Adam Riess led the effort to use the Hubble Space Telescope to find supernovae at z larger than unity to eliminate alternative explanations to acceleration. These definitive observations show that supernovae look fainter at large z than predicted by any of the Lambda-free models. Acceleration is required. The data achieves a best fit when the current energy-density of the vacuum is about 70% of the critical value that makes the large-scale geometry of space Euclidean, where the last result is suggested by the fluctuations in the microwave background. The corresponding small but nonzero value for the cosmological constant then turns out neatly to resolve a conflict in the age of the universe in Euclidean-space models where Lambda is set to zero.

The discovery of a non-vanishing energy density of the vacuum, or some more bizarre alternative, has profound consequences for science and philosophy. It is an accomplishment that we honor tonight with the 2006 Shaw Prize in Astronomy.

Xiaodong Wang is the George L McGregor Distinguished Professor in Biomedical Science at the University of Texas Southwestern Medical School in the United States.  Professor Wang is distinguished for his work on uncovering the biochemical and molecular process that leads to cell death.  One might ask: Why is cell death important?

The human body is made up of ten trillion cells; each day billions of cells die and are replaced by new cells.  Some of the well known examples are our blood cells, which are constantly being replaced by new cells from the bone marrow, or the cells in our intestines that are also constantly turned over. The birth and death of cells must be perfectly balanced, for, if cell birth exceeds death, organs enlarge and tumors may result.  If death exceeds birth, organs atrophy as in some degenerative diseases such as Alzheimer's. There has been a great deal of study on the process that controls cell birth and development and much has been learned.  On the other end however, cell death has been thought for a long time to be a random event, until the work of Robert Horvitz who used a worm model to demonstrate that there is a precise program that leads to cell death.

Professor Wang's contribution is his research on how this programmed cell death is carried out. The surprising discovery he made is that the mitochondrion plays an important role. Mitochondria are small structures within the cell. They contain genes that make enzymes to generate energy for biochemical reactions within the cell. What Professor Wang found was that when a cell is programmed to die, mitochondria release proteins that trigger cell death.  One such protein, cytochrome C, has long been known to be an essential component in generating energy for the cells.  Professor Wang discovered that cytochrome C has a novel function. It binds to another protein and activates an enzyme called caspase-3. Caspase-3 triggers a cascade of reactions that lead to the degradation of the DNA in the cell nucleus, the break up of the cell membrane and the death of the cell. Professor Wang also discovered several other proteins that held this process in check so that cell renewal is regulated in an orderly manner.

What is the importance of Professor Wang's discovery? Based on his elucidation of this biochemical pathway, drugs are being developed to influence this process. For example, to minimize cell injury after a heart attack or a stroke, drugs are being sought to block the mitochondrial proteins that cause cell death.  At the opposite spectrum, cancer cells often prevent cell death by overproducing proteins that block cell death, thereby allowing the cancer cells to proliferate.  Approaches are being developed to overcome this blockage.  Thus Professor Wang's work has opened a field of research into treatment that may benefit a whole host of devastating human diseases.

Mathematicians were prominent in the development of the computer, from the early 19th centruy ideas of Charles Babbage to the modern fundamental work of Alan Turing and John von Neumann in the middle of the 20th century.  But computer science has now developed into a vastenterprise  and the close connection with  mathematics is in danger of being lost, to the detriment of both.

David Mumford and Wu Wen-Tsun are two leading mathematicians who have, in the second part of their careers, re-established that link in two different ways.

Mumford, who made outstanding contributions to the classical subject of algebraic geometry, has applied sophisticated mathematical analysis to the subject of computer vision.  This tries to mimic by computer the complex process by which human beings see and understand the world around us.

Wu Wen-Tsun began as a geometer (under the great Shing-Shen Chern, the first recipient of  the Shaw Prize in mathematics) but went in the opposite direction to Mumford, showing how to develop effective computer algorithms for the automatic proof of theorems in geometry.

It is notorious that computers, which are digital machines, are not well adapted to spatial processes, so that bridging the gap between the computer and geometry or vision as Mumford and Wu have done is a great achievement.  They represent a new role model for mathematicians of the future and are deserved winners of the Shaw Prize.