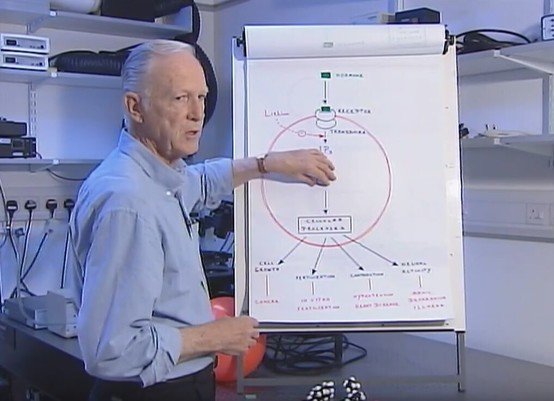 I was born in 1938 in Gatooma, a small town in the middle of Rhodesia, which is now Zimbabwe. I began my education at Jameson High School where I was fortunate enough to be taught biology by Pamela Bates, because she fostered my academic interests and encouraged me to pursue a scientific career. I enrolled in the University of Rhodesia and Nyasaland in Salisbury to read Zoology and Chemistry where I received my B.Sc. in 1960. I then travelled to England to begin research on insect physiology with Sir Vincent Wigglesworth at the University of Cambridge and was awarded my PhD in 1964. I then travelled to the United States to begin a period of post-doctoral study first at the University of Virginia and later at Case Western Reserve University in Cleveland. During my stay in Cleveland I became fascinated about how cells communicate with each other and obtained valuable advice from Dr Ted Rall who a few years earlier had worked together with Earl Sutherland who received a Nobel Prize for his discovery of the second messenger cyclic AMP. Full of enthusiasm I returned to Cambridge in 1969 to take up an appointment at the AFRC Unit of Insect Neurophysiology and Pharmacology. Currently I am an Emeritus Babraham Fellow at The Babraham Institute Laboratory of Molecular Signalling.

A few years after returning to Cambridge, I was lucky enough to discover that inositol trisphosphate (IP3) is a second messenger, which plays a universal role in regulating many cellular processes including cell growth and information processing in the nervous system. My studies on cell signalling began with an interest in trying to understand the control of fluid secretion by an insect salivary gland. This simple model system enabled me to unravel the major features of this new signalling pathway and this led to the discovery of a novel second messenger system responsible for regulating intracellular calcium signalling.

A role for second messengers in controlling fluid secretion was first recognised when cyclic AMP was found to mimic the stimulatory action of 5- hydroxytryptamine. Subsequent studies revealed that calcium was also important and I was one of the first to draw attention to the integrated action of the cyclic AMP and calcium messenger systems. I showed that signal calcium could be derived from both external and internal reservoirs and was puzzled, like many others, about how cells gained access to their internal stores of calcium. The answer lay in Michell's hypothesis that the hydrolysis of inositol lipids played a role in calcium signalling. I developed a new approach to study receptor-mediated inositol lipid hydrolysis by measuring inositol phosphate formation. Of particular significance was the introduction of the lithium amplification technique to provide an exquisitely sensitive method for measuring inositol lipid turnover. My work on lithium provided new insights into how this drug controls manicdepressive illness. Using the lithium amplification method, I demonstrated that hormones stimulated a rapid formation of IP3, which led me to propose that this metabolite might function as a second messenger. Such a messenger role was rapidly verified when IP3 was found to mobilize calcium when injected into cells. It is now apparent that the IP3/Ca2+ signalling system regulates a wide range of cellular processes such as fertilization, secretion, metabolism, contraction, cell proliferation and information processing in the brain. This work has sparked a worldwide interest in the role of this signalling system in cell regulation.

My most recent work has concentrated on the spatial and temporal aspects of calcium signalling. I discovered that the level of calcium oscillates when a hormone stimulates cells. What was very exciting was the fact that oscillation frequency varied with agonist concentration, which led me to propose that the signalling system was frequency-modulated. My earlier discovery of the IP3/calcium pathway then provided an explanation of such oscillatory activity. My laboratory has also been interested in exploiting rapid confocal imaging techniques to characterize the elementary events of calcium signalling. This radically new understanding of how calcium signals are produced has provided new insights into both neural and cardiac cell signalling.

I became a Fellow of Trinity College in 1972 and was elected a Fellow of The Royal Society in 1984. In 1999 I was elected to the National Academy of Sciences and the American Academy of Arts and Sciences. For my work on second messengers I have been fortunate to receive numerous awards and prizes, including The King Faisal International Prize in Science, The Louis Jeantet Prize in Medicine, The Albert Lasker Medical Research Award, The Heineken Prize for Biochemistry and Biophysics, The Wolf Foundation Prize in Medicine and The Shaw Prize in Life Science and Medicine. In 1998 I went to Buckingham Palace to be knighted by HM Queen Elizabeth II for services to science.