Ronald Drever, Kip Thorne and Rainer Weiss are the primary figures responsible for the conception and design of the Laser Interferometer Gravitational-Wave Observatory (LIGO). LIGO’s recent direct detection of gravitational waves represents the first probe of physics in the limit of strong gravity, where massive objects moving at velocities close to that of light drive nonlinear waves in spacetime.

LIGO’s discovery ranks among the most significant ever made in astronomy, and its importance can be viewed from a number of distinct perspectives. Most simply, LIGO has provided a third strand to the means by which we can observe the universe, in addition to electromagnetic radiation or energetic particles. LIGO has thus established an entirely new branch of astronomy, allowing us to study phenomena where signals from existing astronomical messengers are entirely lacking. The impact of this new tool seems likely to be as revolutionary as, for example, the opening up of radio astronomy and the subsequent discovery of pulsars and quasars.

The direct observation of gravitational radiation validates a basic prediction of general relativity, showing such fundamental expectations based on causality to be correct. However, LIGO’s results go much beyond the weak spacetime fluctuations already inferred from the orbital decay of pulsars in binary systems. By probing the region of strong and time-dependent gravitational fields from which the waves originate, they reveal remarkable properties of black holes.

Black holes have been a feature of astronomical discussion at least since the detection of quasars in the 1960s, but almost all arguments for their existence were indirect. In X-ray binaries, or in the centres of galaxies, we see objects that are too compact and too massive to correspond to any alternative astronomical structure that can exist according to standard relativistic gravity. But a different theory of gravity might change this conclusion, for example by raising the maximum mass of a neutron star, so the existence of black holes could not be demonstrated without probing directly the characteristic features of general relativity, such as the event horizon. Even to demonstrate that a horizon existed would have been a huge step forward (towards which projects such as the Event Horizon Telescope have been dedicated). But LIGO has achieved this and much more: probing not only the structure of spacetime in strong gravity, but also how such a structure evolves dynamically. The results are as expected for the merger of a pair of black holes, even to the fine details of the ringdown oscillations of the horizon as the resultant single black hole settles to its final state, exactly as computed both analytically and numerically. All this pushes the validation of relativistic gravity into a completely new regime.

Perhaps the most impressive feature of LIGO’s achievement is that it required the focused efforts of many scientists over more than four decades. But along the way, progress always hewed closely to the vision presented in the proposal that the LIGO team submitted to the US NSF in 1989. Such a triumph of team science is perhaps only matched by the 2012 detection of the Higgs boson at CERN. 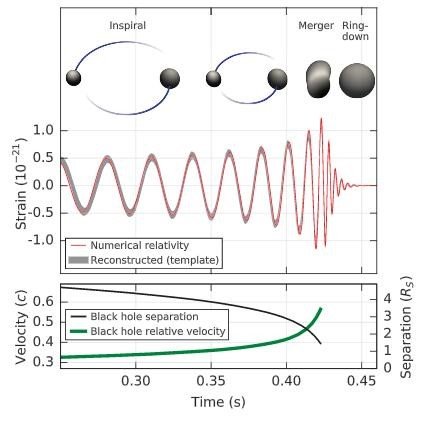