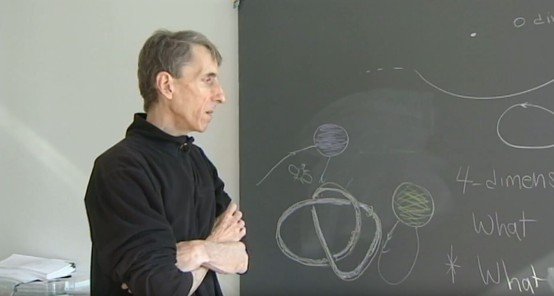 I graduated from Cornell University with a degree in Physics in 1975, and then spent a year as a graduate student in the Astronomy Department at Princeton University. I found this not to my liking, and was fortunate enough to have met Bill Press, who helped facilitate a transfer to Harvard University where I enrolled as a graduate student in the Physics Department. I worked for a year there under the tutelage of Bill Press and Larry Smarr (then a Junior Fellow at Harvard), but soon moved to the more theoretical side of that department. My first substantive paper on gauge theoretic mathematics was the lucky result of hearing a lecture at Harvard by the physicist Eric Weinstein from Columbia. He posed a problem about the existence of solutions to the so-called vortex equations; these come from the Ginzburg-Landau model for superconducting vortices. I went home and stumbled on a proof that the postulated solutions did indeed exist. This was roughly in 1978, and to my amusement, these same vortex equations have been with me in one form or another for the past thirty years.

I did further work to elucidate the structure of the solutions to these vortex equations, but I also studied a non-abelian analog that is called the Bogolmony monopole equations. These equations came from a version of the then new Weinberg-Salam theory that unifies the weak and electromagnetic forces. Only one solution to the latter was known to exist at the time. During this time at Harvard, I was influenced most by Raoul Bott. Raoul had his class on differential geometry and topology; I and myriad others were enthralled by his glorious lectures.

I more or less finished writing my PhD thesis in the fall of 1979, and with six months until the June 1980 graduation, was at a bit of a loose end. Raoul Bott suggested that I hang out at the Institute of Advanced Studies to talk with a differential equations specialist by the name of Karen Uhlenbeck. Steve Adler was kind enough to arrange an unofficial sort of stay, and so I headed down to Princeton. Karen had a profound effect on my subsequent view of mathematics. She taught me (and is still teaching me) a tremendous amount, although I am too dim to learn more than a fraction of her wisdom.

It was while visiting the Institute that I tripped over a general existence theorem for the Bogolmony monopoles. This good fortune came late one night in the Princeton library.

Shortly after receiving my PhD, I applied my monopole equation techniques to prove an existence theorem for the instanton equations on 4-dimensional spaces. I was starting a Harvard Junior Fellowship, with an office in Harvard's Mathematics Department. My first theorem required that the ambient space have a positive definite intersection form. I told Raoul about my theorem, and he asked: ‘Well, can you tell me some spaces with such intersection forms?' I said 'Gee, I dunno, maybe the 4-sphere and the complex projective plane?' I didn't pursue this question; this was the first of many serious errors of judgement on my part.

My fellow Shaw laureate, Simon Donaldson (then a graduate student at Oxford) had the sense to ask and pursue this intersection form question, and so came to his first great theorem about smooth, 4-dimensional manifolds. I met Simon about a year later while spending the fall at Oxford at the invitation of Sir Michael Atiyah. Here, I truly began my lifelong study of mathematics under Simon's unknowing guidance. I freely admit that I owe Simon a tremendous debt for all that I have learned from him (and am still learning from him) over the subsequent years; and for his kindness to me as well.

The work on the instanton equations and their applications by Simon and then others, opened a vast new vista with regard to the interplay between geometry and topology in three and four dimensions. I was fortunate enough to be in at the beginning, and to have stumbled to more than my fair share of useful theorems.

A second great vista opened with Ed Witten's suggestion in 1994 to use what are called the Seiberg-Witten equations to study questions in four dimensional differential topology. I was again most fortunate to be in at the start of this new revolution; and to have Tom Mrowka and Peter Kronheimer as great friends and compatriots in the subsequent investigations of Witten's proposal. I owe them both a huge and steadily increasing debt as well.

I attribute my success to luck. I have been very, very lucky in life; and also in being influenced by great and wise people. I have mentioned some already; two others who taught me about both life and mathematics are Rob Kirby and S-T Yau.